Abomey’s Treasures Finds Their Way Back To Benin From France

In a festive ceremonial worthy of those who accompany the greatest political, cultural and sporting events, France has returned to this African country 26 works of art from the royal treasures of Abomey ,looted in the ninetieth century by the French colonial troops of General Dodds during the sacking of the Palace of Abomey in 1892.

Suffice to say that we are touching here on a “sensitive cord” of national pride, and it is not surprising that this return has been in the conversations of Beninese for several weeks.

Preserved at the Musée du Quai Branly in Paris since 2003, after passing through the Musée d’Ethnographie du Trocadéro and the Musée de l’Homme in the same city, these treasures include major cultural and religious works such as the famous totem statues of the ancient kingdom of Abomey (sharkman, bird-man, lion-man), or the carved wooden thrones of Kings Ghézo and Glèlè.

The kingdom of Abomey was vast – from western Nigeria to Ghana – and highly respected since its founding in the seventeenth century. It remained so until 1890 under the reign of King Behanzin, the last independent ruler who fought valiantly against the invaders. The return to the country of the twenty-six works of art is thus part of a history as rich as it is glorious. Moreover, this is not a unique case, and other African countries, such a Nigeria, are in a comparable configuration.

Three sequences (plus one) for a successful return

First sequence: in 2017, during his speech in Ouagadougou, Burkina Faso, the French President made a clear commitment to facilitate within five years the various restitutions – whether temporary or permanent – of cultural and religious works belonging to African heritage and identified in French collections.

Second sequence: in 2018, in a report for the Ministry of Culture that caused a sensation entitled Restitution of African Cultural Heritage: Towards a New Relational Ethics, its authors Felwine Sarr and Bénédicte Savoy announced that “there is no longer an impossible”.

Third sequence: in December 2020, an important law is passed. It makes restitution possible by explicitly authorizing derogations from the principle of “inalienability” of works owned by France that were the result of looting and robbery characterized.

The three sequences, at once political, diplomatic, cultural and legal, do not begin in 2021. This “historic moment of national pride” for the Beninese authorities began in 2016, a little before the so-called “Ouagadougou” speech, under the presidency of François Hollande.

A first request was made by Benin, but refused by the Minister of Foreign Affairs at the time, Jean-Marc Ayrault, for legal reasons related, precisely, to the inalienability of the assets of public collections. It is therefore President Emmanuel Macron and his Minister of Culture, Roselyne Bachelot, who will receive their Beninese counterparts – President Patrice Talon and the Minister of Culture Jean-Michel Abimbola – to sign and solemnize in Paris the restitution of the 26 works of art.

Two symbolic pairs – the heads of state and their ministers of culture – signed the deed of transfer of ownership from France to Benin and allowed the works to return to their country after 130 years of exile.

As in any transfer of title deeds, the question of logistics inevitably arises. Surprisingly, the report by Felwine Sarr and Bénédicte Savoy never talks about the “logistics” associated with the return of works of art.

This dimension is obscured by ignorance or simply by “denial of complexity”. Transport is barely mentioned in a few words, page 69:

“The return of the works requires in any case a budget dedicated to transport and insurance costs, which we know can be very high depending on the fragility of the work in question and its market value.”

This is obviously a bit brief in the face of the challenges in terms of inventory, identification, packaging, transport and storage/destocking, collection and disbursement (in the strict sense)! All this is not trivial, and it is indeed the Beninese delegation that, symbolically, brought by plane the treasures of Abomey on African soil.

Let us start by quickly drawing a picture of a singular logistics, which has little to do with the logistics related to consumer goods.

Organizing the transport of works of art is not easy, especially from one continent to another, and the logistics involved raise formidable difficulties from which the twenty-six works have not escaped.

It is known, among other things, that the damage inflicted on works of art generally comes from the conditions of execution of transport and storage. The age of a work of art determines a given level of fragility, knowing that too high or too low a temperature and humidity can generate irremediable degradation as a result of uncontrollable chemical reactions.

The logistics of works of art also require special attention to handling operations. To reduce the risks taken during manipulations, manual or mechanical, each work of art requires specific packaging according to the nature of the object, as well as according to the mode (land, sea or air) and the duration of transport.

The so-called bufferingtechnique, most often used, is based on three layers of protection: a chemically neutral envelope covers the work; a flexible envelope reduces hygrometric variations and vibrations; a rigid envelope preserves from all shocks.

The twenty-six works of art of abomey’s royal treasures reach Benin on November 10, 2021, by plane from Paris, then the Beninese presidential palace by special truck. 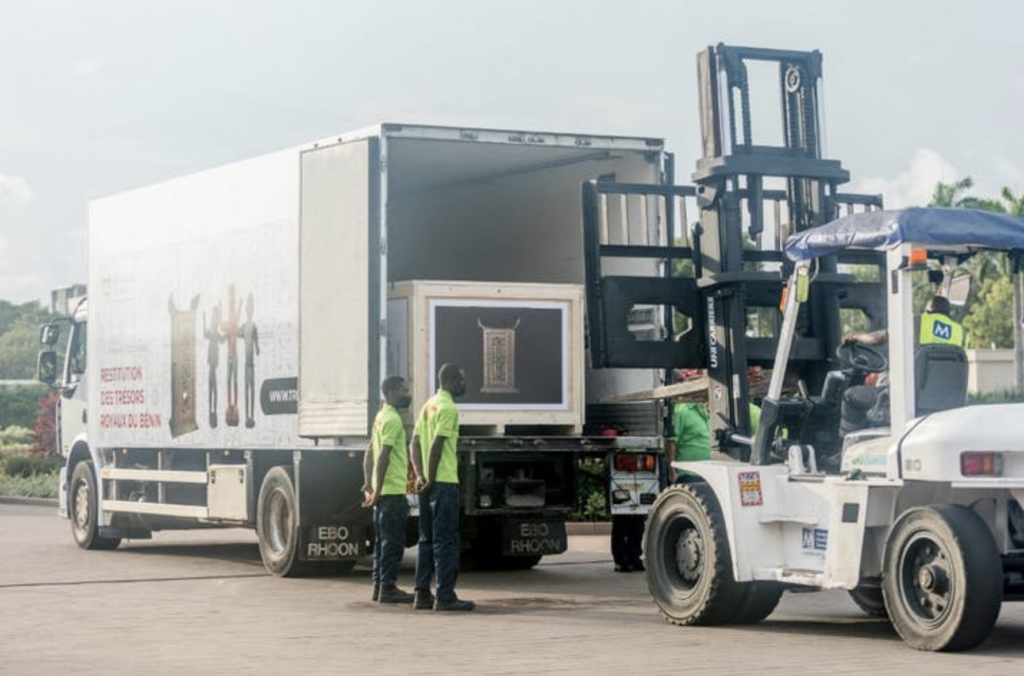 As Benin is located in sub-Saharan Africa, on the Atlantic coast, the climate data have nothing to do with those of Paris. An acclimatization period of about two months to Beninese heat and humidity conditions is therefore essential, before a three-month exhibition at the presidential palace. Storage conditions are therefore critical.

Subsequently, it is planned that the treasures will be re-cashed and transported by road to the ancient Portuguese fort of Ouidah, on the Atlantic coast, west of Cotonou, where they will be exhibited in the governor’s house, that is, on the historical and symbolic locations of the history of slavery and European colonization.

The 26 works of art will wait there for some time, until the construction of a new museum in Abomey to welcome, preserve and protect them. Again, warehousing will be at the heart of the success (or failure) of the return, and it is easy to understand that other African countries, such as Chad, are already wondering about the organization of their own future renditions.

However, it would be clumsy to reduce the logistics of returning the twenty-six works of art to purely operational and concentrated dimensions in a short time.

The logistical adventure itself began with their looting in 1892 and continued in France, as reported, since they were transported, stored and exhibited at the Trocadero Museum of Ethnography, the Musée de l’Homme and, finally, the Musée du Quai Branly.

However, the logistical dimension remains very singular because, on the one hand, these works are physically fragile (wood, stone, sculptures, setting, etc.) and, on the other hand, they are culturally sensitive because they symbolically represent the spirits of Kings, the spirits of families and the spirits of power.

As such, they cannot be manipulated or stored without paying attention to the place, temporality and proximity to other objects, to other energies, among other constraints and specificities.

The interview granted to Le Point by Flavien Brice Alihonou, a practitioner of the cult, on November 10, 2021, offers undoubtedly one of the best explanations of the symbolic significance of the restitution of the twenty-six works of art:

“For us, they are not mere objects, they are witnesses of the power and wealth of our African kingdoms before colonization. Most artists and craftsmen had the function of magnifying power. The recades are sacred, the thrones, the position of the cowries draw signs of the Fâ, our system of divination. They testify to the veracity of the sacred value of these works. »

In short, such sacred objects are not transported and handled as if they were ersatz made in China for tourists in goguette.

On the contrary, we can speak here of a real “memorial” logistics that cannot rely solely on traditional performance criteria  (cost, time, integrity).

We are in the presence of a powerful animism in which logistics must be careful to respect mystical spirits. From this point of view, it goes far beyond the simple museographic logic of respect for the integrity of objects, now well-known and mastered by large companies specializing in the provision of logistics services.

Such logistics – much more sensitive – conceals a market in the making that will be complex to manage because Europe has about 90% of Africa’s cultural and cultural heritage. For example, the collections of the Musée du Quai Branly contain almost 70,000 works of art from sub-Saharan Africa, the majority of which were exfiltrated during the French colonial period. The British Museum, the Louvre, the Rijksmuseum in Amsterdam, the Weltmuseum in Vienna, and many other museums are concerned by these projects or, at least, by requests from Chad, Ethiopia, Senegal, Côte d’Ivoire, Nigeria and many other nations to reconquer their memory, heritage and culture.

The dilemma of universalism versus culturalism

Obviously, the central issue related to the return of works of art to African countries is not of a logistical nature, but first of all of a legal and diplomatic nature, as we pointed out earlier. It places at the center of the debates the nagging guilt of the West, and how to repair offenses to ancient civilizations.

To imagine “European-style” that the organization of the repatriation of these works of art will be a simple question of stewardship would lead to making a serious mistake. There is a singular logistics, of a “memorial” nature, in the return of the royal treasures of Abomey which indicates that it becomes more essential than ever to take into account the culturalist dimensions of logistics.

We propose here a first draft of the definition of “memorial” logistics: it can be seen as a global management approach aimed at controlling the physical, informational and spiritual circulation of works with a cultural and/or religious dimension transferred via the supply chains of several institutions of the same country and internationally.

No doubt it is necessary to promote a real aggiornamento of the dominant modes of thought in logistics, based on a significant normativity. Indeed, the organization and operation of supply chains have been based for decades on advanced standardization/standardization and the search for maximum interoperability, especially between material and information flows. One of the best-known examples is the palletizing system, which strictly defines the size that trucks, containers, warehouses, store storage spaces, robots, and ultimately, the products themselves should have!

Logistics has thus secreted over time “traffic standards” whose objective is to make the exchange of products as fluid as possible. Wouldn’t the return to Benin of Abomey’s treasures have an unexpected virtue here: to signal another way where the Human and the Spiritual are essential elements to be taken into account in the management of supply chains? 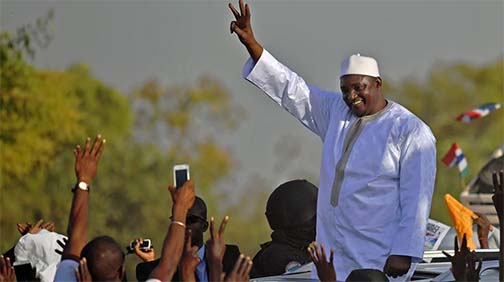 The Gambia’s President Adama Barrow, of the National People’s Party, comfortably won re-election on 4 December with about 53% of the vote.

The runner-up, Ousainou Darboe of the United Democratic Party, won about 28% of the vote. In third place was Mama Kandeh of the Gambia Democratic Congress with about 12%.