An audacious Black heavyweight champion was slated to defend his title against a white boxer in Reno, Nevada, on July 4, 1910. It was billed as “the fight of the century.”

The fight was seen as a referendum on racial superiority – and all hell was about to break loose in the racially divided United States.

Johnson’s victory, in the manliest of sports, contradicted claims of racial supremacy by whites and demonstrated that Blacks were no longer willing to acquiesce to white dominance. Whites were not willing to give up their power. The story has a familiar ring today, as America remains a country deeply divided by race.

I began my book, “From Jack Johnson to LeBron James: Sports, Media, and the Color Line,” with Johnson because the consequences of the fight’s aftermath would affect race relations in sports, and America, for decades.

A backdrop of racial hostility

Born in 1878 in Galveston, Texas, Johnson grew up as the Jim Crow era in American history was getting started. The previous year, Rutherford B. Hayes became president after promising three former Confederate states – South Carolina, Florida and Louisiana – that he would withdraw federal troops, who had protected the measure of racial equality Blacks were beginning to achieve.

As federal forces left, whites disenfranchised Black voters and passed segregation laws, which were enforced by legal and illegal means, including police brutality and lynching. Journalists, too, sought to maintain social order by preserving myths about white supremacy.

Johnson’s boxing career challenged those myths. He dispatched one white fighter after another and taunted both the fighter and the crowd. He was brash and arrogant and made no attempt to show any deference to whites. He sped through towns in flashy cars, wore expensive clothes, spent his time with gamblers and prostitutes, and dated white women, which Black sociologist and commentator W.E.B. Du Bois considered “unnecessarily alienating acts.”

Setting up a racial battle

Johnson won the heavyweight title by easily defeating the defending champion Tommy Burns in 1908. Novelist Jack London, writing in the New York Herald, wrote about Johnson’s “hopeless slaughter” of Burns and, like other journalists, called on former champion James Jeffries to come out of retirement and “wipe that smile from Johnson’s face.”

Jeffries announced to the world that he would “reclaim the heavyweight championship for the white race.” He became the “Great White Hope.”

The Chicago Defender, a Black newspaper, said Jeffries and Johnson would “settle the mooted question of supremacy.” The Daily News in Omaha, Nebraska, reported that a Jeffries victory would restore superiority to the white race.

Before the fight, there were signs whites feared a Jeffries loss – and that this loss would not be restricted to the boxing ring but would have ramifications for all of society.

The New York Times warned, “If the black man wins, thousands and thousands of his ignorant brothers will misinterpret his victory.” The message was clear: If Jeffries won, white superiority would be proved – but if he lost, whites would still be superior.

After Johnson easily defeated Jeffries, the Los Angeles Times reinforced white supremacy, telling Blacks: “Do not point your nose too high. Do not swell your chest too much. Do not boast too loudly. Do not get puffed up. … Your place in the world is just what is was. You are on no higher place, deserve no new consideration, and will get none.” Nearly a century later, the newspaper apologized for that 1910 editorial.

In response to the violence, many cities forbade a film of the fight to be shown in theaters. In 1912, Congress, citing the same motion picture, passed the Sims Act, banning the transport of fight films over state lines.

In doing so, it kept Blacks and whites from seeing Johnson beat a white man. Historian Jeffrey Sammons says, “in many ways, Johnson represented the ‘bad n—–’ that whites were so willing to parade as an example of why blacks must be kept in ‘their place.’”

An outpouring of violence

No white boxer could defeat Johnson in the ring, so white America worked to defeat him outside the ring. Johnson was arrested in 1912 and charged with violating the Mann Act, which made it illegal to transport women across state lines “for the purpose of prostitution or debauchery, or for any other immoral purpose.” He served 10 months in federal prison.

But he was much more than one man. “No longer the respectful darky asking, hat in hand, for massa’s permission, Johnson was seen as the prototype of the independent black who acted as he pleased and accepted no bar to his conduct,” Randy Roberts wrote in “Papa Jack,” his biography of Johnson. “As such, Johnson was transformed into a racial symbol that threatened America’s social order.”

Whites responded to Johnson’s triumph by using violence to keep Blacks in their place by any and all means. When Black construction workers celebrated Johnson’s victory near the town of Uvalda, Georgia, whites began shooting. As the Blacks tried to escape into the woods, the whites hunted them down, killing three and injuring five, Roberts wrote.

Such scenes were repeated throughout the country, according to local media reports.

When a Black man in Houston expressed his joy over the fight’s outcome, a white man “slashed his throat from ear to ear.” Another Black man in Wheeling, West Virginia, who was driving an expensive car, just like Johnson was known for, was dragged from his car by a mob and lynched. A white mob in New York City set fire to a Black tenement and then blocked the doorway to keep the occupants from escaping. 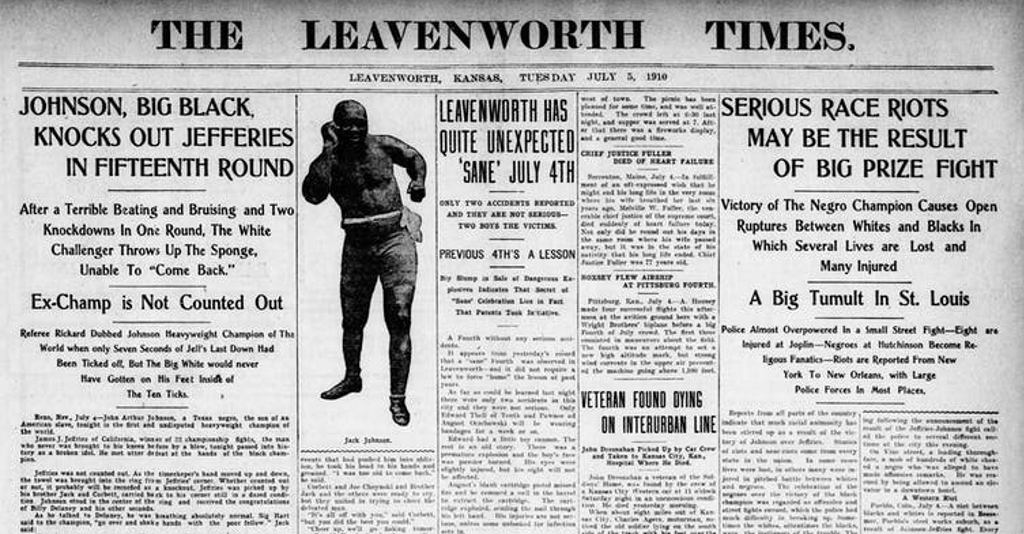 Johnson’s punishment served as a cautionary tale for Blacks during the Jim Crow era. Black athletes, however talented, whether it was sprinter Jesse Owens or boxer Joe Louis, were warned they had to be the “right type” of Black person, one who knew his place and did not challenge the racial status quo.

In those sports where Blacks were not banned and instead begrudgingly allowed to compete with and against whites, there were violent attacks on Black athletes. Jack Trice, an Iowa State football player, died of injuries from the attack he suffered in a game against the University of Minnesota in 1923.

The end of professional baseball’s color line in 1946 line was possible only because Jackie Robinson promised he would not respond to racist epithets and physical abuse so that he would be acceptable to white America.

In the 1960s, white America taught Muhammad Ali, whom many considered the “wrong type” of Black athlete, the lesson it had once taught Jack Johnson. Ali, a brash Muslim who refused to defer to the demands of white supremacy, was convicted of draft evasion for refusing to be inducted into the armed services. He was stripped of his heavyweight title and sentenced to prison.