Black-Led Western, ‘The Harder They Fall’ Is Not Alternative History

With a cast led by Black actors, including Idris Elba and Regina King, Jeymes Samuel’s upcoming film “The Harder They Fall” stands in stark contrast to the white-dominated world of classic Westerns. But the way Samuel sees it, his vision is more rooted in truth than John Wayne’s version of the Old West.

In fact, the Smithsonian estimates that one in four cowboys were Black, just like Nat Love, a real-life figure portrayed by Jonathan Majors in the film. Elba takes on the role of another real person, the outlaw leader of the Rufus Buck Gang.

Samuel spoke during a recent Q&A broadcast online following the Los Angeles premiere of the film the day before. He was joined by cast members Elba, King, Majors, and Zazie Beetz. “The Harder They Fall” is the first feature from writer/ director/ producer/ composer Samuel, who is perhaps better known for releasing his music and accompanying shorts as The Bullitts.

Elba says the film is nothing short of revolutionary for its portrayal of Black people in the region and time.

“What we should be celebrating and what we have been celebrating here today is the impact of [the movie] on film and storytelling. My daughter is at NYU, she’s 19-years-old, she came to see the film and she immediately went back, and it changed her life because she saw historical figures that she had no consciousness of, in a genre she had no attachment to,” he said. “That ripple effect is going to help cinema, filmmakers, diversify their lens a bit in how you tell stories of Black folk. We found ourselves in a little bit of a hamster wheel of wanting to regurgitate stories about history, but only from a specific lens.”

And for Samuel, one entry point into challenging tropes is the movie’s score. “It was always the case of not wanting to tread where cinema had already treaded, doing something wholly new, giving it its own signature,” he said. “To give it its own character, sonically, I wanted to literally bring the entire diaspora together. So I’ll go to Africa — to Cape Verde and Mali and Nigeria … and bring it to America, I’ll go to Jamaica.”

King, too, said she considered the African diaspora and the resiliency of Black people when approaching her character, Trudy Smith.

“A perfect example is music, what Jeymes just explained with how the Caribbean connects with the African connects with the American,” she said. “I felt like, ‘Oh, here’s an opportunity to, though dialect, show where all of that exists. When you listen to Trudy you shouldn’t be able to pinpoint where she’s from. She should sound like she’s from everywhere and that’s kind of all these characters … They’re nomads and we’re meeting them in a space that Jeymes has created. They’re all real people, but he created a space for the audience to get introduced to them together.”

Netflix will starts streaming “The Harder They Fall” November 3. 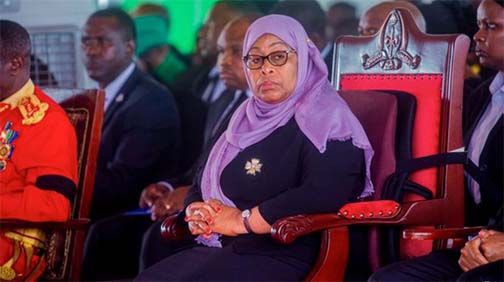 Tanzania’s President Samia Suluhu Hassan caused a stir after she appointed Stergomena Tax as defense minister. She becomes the first woman to hold the critical portfolio since the country’s independence.

“I have decided to break the longtime myth that in the defense ministry, there should be a man with muscles,” President Samia Suluhu Hassan said earlier this week as she administered the oath of office to Stergomena Tax.