Ethiopia/Tigray: The Devastating Toll Of A vicious war

A year since war broke out in the Tigray region of Ethiopia, conflict in the country is intensifying. In this episode of The Conversation Weekly podcast, we talk to two experts about the worsening humanitarian situation in Tigray and the international community’s response to the conflict. And we hear from a researcher who found that reusable food containers aren’t always better for the environment than disposable ones.

“In my 30 years of experience in complex emergency settings, this is one of the most vicious conflicts that I have come across.” Mukesh Kapila, professor emeritus of global health and humanitarian affairs at the University of Manchester in England and a former UN official, condemns the tactics used by the Ethiopian army during the war. “When you wage a total war, you’re waging a war of annihilation. That’s why many people, including myself, call the conflict a genocidal conflict.”

The war in Tigray began in early November 2020 when forces loyal to the Tigray People’s Liberation Army (TPLF), attacked an Ethiopian army outpost in the regional capital, Mekelle. The Ethiopian army responded with brutal force to suppress the rebellion. The year-long conflict has involved a number of other armed groups, including troops from neighboring Eritrea fighting on the side of the Ethiopian government.

This week, a joint investigation by the Ethiopian Human Rights Commission and the UN Human Rights Office said all sides had violated human rights in the war, and that war crimes may have been committed.

Fighting between Tigrayan and federal forces has intensified in recent weeks. The Ethiopian army has hit Mekelle with a series of airstrikes since mid-October. Meanwhile, the TPLF claimed it had made territorial gains in the neighboring Amhara region. On November 2, the Ethiopian government declared a state of emergency amid reports Tigrayan forces could consider marching on the Ethiopian capital, Addis Ababa.

Tigray remains under a blockade by the Ethiopian army, including of communications. Kapila says that for the past several months, “every single form of humanitarian obstruction you can think of, and that I’ve seen in places around the world only in phases, is now prevalent on a systematic basis throughout Tigray.”

The UN and other humanitarian organizations have found it very difficult to help those in need. In late October, the Ethiopian air strikes forced a UN humanitarian aid flight to Tigray to turn back. This followed the expulsion of seven UN officials earlier in the month.

Kapila laments that UN officials in the Ethiopian capital, Addis Ababa, got themselves into a position where “they’re being kicked around like a football and kicked out”. He says that’s a “reflection of the poor quality of the leadership both in Addis Ababa of the UN system, as well as the ultimate UN leadership of António Guterres in New York.”

Within Tigray, famine is already killing people. Emnet Negash, a PhD candidate at Ghent University in Belgium, and also an assistant professor at Mekelle University, talked to Ghana-based Godfred Boafo, one of the hosts of The Conversation’s Pasha podcast.

Negash has been part of a team monitoring the food situation in Tigray using satellite images and telephone interviews with colleagues on the ground. Their research indicates that at the end of August, just before harvest time, “20-30% of the land was left fallow”, compared to around 5% in previous years. While some farmers had been killed, others were denied access to their land, or had their farm equipment looted or oxen killed.

On top of this, Negash says much of the land isn’t projected to produce a reasonable crop yield this year. With desert locusts swarms already reported in the vicinity, he’s frightened the food crisis could be about to get even worse. “Famine does not only directly kill you,” says Negash, “it also increases the chance of people dying from simple sickness.” 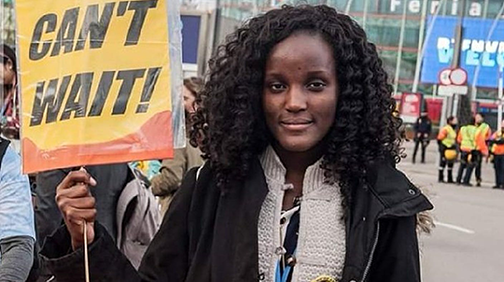 Across Africa, the climate crisis is happening to us now, and the stories Africans have to tell are urgent – but who is listening?

When The Associated Press cropped me from a photo of youth climate activists in Davos in late January 2020, the story went viral. Since then, I’ve given lots of interviews and answered many questions on how I felt about being erased from that article.