January 23, 1977 sees the premiere of Roots, a groundbreaking television program. The eight-episode miniseries, which was broadcast over eight consecutive nights, follows a family from its origins in West Africa through generations of slavery and the end of the Civil War. Roots was one of the most-watched television events in American history and a major moment in mainstream American culture’s reckoning with the legacy of slavery.

The miniseries was based on Alex Haley’s novel Roots: The Saga of an American Family, which was based on research he had conducted into his own family history. The story succeeded in dramatizing and personalizing the brutal, true story of the Atlantic slave trade and slavery in America.

It begins with Kunta Kinte, a warrior belonging to the Mandinka ethnic group and living in what is now The Gambia. Kunta is captured and sold to traders, endures a harrowing journey aboard a slave ship, and is eventually sold to a plantation owner in Virginia. The story follows the remainder of his life, including a brutal scene in which he is tortured into acknowledging his slave name, Toby, and continues to follow his family for several generations. Kunta’s daughter, her son George, and his sons Tom and Lewis experience life on various plantations and are subjected to many historically-accurate brutalities, including the separation of enslaved families and harassment from whites after the abolition of slavery. The book and miniseries were recognized for balancing this sweeping narrative with intensely personal stories and brutally realistic depictions of slavery.

Due to fears about the audience’s reaction to these depictions, ABC decided to air Roots on eight consecutive nights as a way of cutting its losses. Instead, Roots achieved unprecedented popularity. An estimated 140 million people, accounting for over half of the population of the United States, saw the series, and its finale remains the second-most-watched series finale in American television history. A cultural phenomenon, it was nominated for 37 Emmys and won nine, including Best Limited Series and Best Writing in a Drama Series. A sequel miniseries, Roots: The Next Generations, aired in 1979 to impressive ratings and several more award nominations.

Some found Roots to be divisive—future president Ronald Reagan opined that “the bias of all the good people being one color and all the bad people being another was rather destructive.” Other commentators noted that the series went out of its way to include “good” or morally conflicted white characters who did not exist in the book. Overall, however, critics praised Roots for “dealing with the institution of slavery and its effect on succeeding generations of one family in a dramatic form,” something uncommon in American culture and virtually unheard of on American television at the time. Roots continues to be remembered as both a moving work and a step forward in America’s difficult confrontation with its racial history. 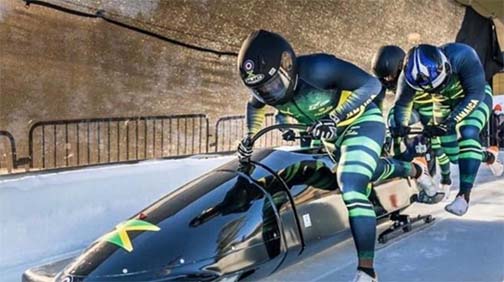 Twenty Four Years After, Jamaican Bobsled Team Due At The Olympics And Burden Of A Nation’s Legacy

It has been 24 years since the four-man Jamaican bobsled team has made it to the Olympic games.

The team’s first foray into the sport was in 1988 and that journey inspired the popular movie, “Cool Runnings.”