When you wake up to South Africa’s biggest morning radio show,  The Take Off with Bongani Mtolo and Nonala Tose – Lonwabo Nkohla on Sports on Radio 2000; you can easily believe that you are back to the 1990s, as the show delivers the best that the Kwaito genre emerges from.

With many listeners chanting “Kwaito Never Die”, then you know that Kwaito is here to stay and grow.

And on the 30th anniversary of the new generational South African music genre, KWAITO, it’s fitting to celebrate this sensational musical artistry.

Kwaito, which emerged in 1991during the transition from apartheid towards the democratic dipensation, is classified as a weapon to deal with the oppression of black people and the context of colonialism in which they still find themselves in.

Sung mostly in several of South Africa’s indigenous languages, which are Ndebele, Northern Sotho, Sotho, Swazi, Tsonga, Tswana, Venda, Xhosa and Zulu; and including Afrikaans and English, makes Kwaito even more appealing to a wider audience.

When this musical genre emerged in the 1990s, it introduced a mixture of a number of different rhythms from Marabi of the 1920s, Kwela of the 1950s, Mbaqanga/Maskhandi of the hostel dwellers, Bubblegum music of the 1980s, and Imibongo (African praise poetry).

And at times the use of styles drawn from the African diaspora’s hip hop, dub, jazz and UK house is clearly evident.

Rangoato Hlasane explains that due to innovative musicians and producers who cut their teeth during the ‘bubblegum’ era were exposed to new international sounds such as house and hip-hop.

These fresh influences, coupled with their mastery of electronic music production and the rapidly changing political climate, provided a fertile ground for new expression, culminating in the Kwaito sound that provided the soundtrack to the 1990s, says Hlasane.

M’du Masilela, a pioneering Kwaito star says when house music got popular, people from the ghetto called it Kwaito after the Afrikaans slang word kwai, meaning those house tracks were hot, that they were kicking.

And the much loved SeaBee hits of the early 1990s like Homeboy, Thiba and I Wonder Why certainly cemented the foundation and paved the way for the Kwaito revolution to triumph.

Popular view about Kwaito attests that in a country where nearly half the population is under 21, youth culture exerts a major influence on social life. South Africa has a population of around 60 million now; about 75% are black. Many live in the ghettos. It’s these youths, especially who lay claim to Kwaito. Their stories sparked it, and the post-apartheid economy gave them the chance to produce and sell it.

Kwaito cries out to impoverished youths in the ghetto and has given young black artists a chance to shine.

It has also been stressed that songs such as Arthur Mafokate’s ‘Kaffir’ addresses the prevalence of direct racism and Zola’s song Mblwembe (problem child) reflects the prevalence of crime in the townships that serve as a means of social dialogue.

At least two artists claim to be the originators of Kwaito. Kyle Naidoo, who claims he was the first to mix bubble gum with House from the UK and the US back in the 1980s.

In one of the first official Kwaito songs played in Mzansi, by Mafokate, with the usage of one of the most degrading words that white colonialists would call black Africans, is the Arabic word for ‘non-believer’ or a ‘heathen’, ‘Kaffir’, which is the word that Afrikaans described the natives with. In his song, Mafokate demands the Boss, ‘Nee baas’, ‘No Boss’, Don’t Call Me Kaffir’.

The song, written in several forms, talked about how apartheid will not just go away overnight but change is coming.

Hlasane reveals that as a rival for Arthur’s title, Mdu Masilela ultimately settled for ‘Godfather of Kwaito’. Mdu learned his skills in the 80s with the likes of Chicco Twala, Yvonne Chaka Chaka and Pat Shange. In 1989 he collaborated with Mandla Mofokeng to form MM Deluxe, releasing Where Were You? (1989). Mdu teamed up with Sbu (of ‘AmaLawyer’ and ‘Monate Fela’ fame), Pro and Magesh (of TKZee) to form Mashamplani, known for hits such as ‘Vokol as Niks’ and ‘Hey Kop’ in 1995. After royalty disagreements, the group disbanded and Mdu formed Mashamplani 2, one of the first groups on his Mdu Records. Other members of the stable included the big-selling Ma-Willies. Mdu’s biggest hits include ‘Tsiki Tsiki’ end of 1993 to (1994), ‘YU4Me’ (1995), ‘Ipompe’ (1996), ‘Mazola’ (1997) and ‘AmaBankbook’ (1997).

An article posted on CNN described Kwaito as a whole subculture with a swirl of irresistible dance beats.

A Newsweek report says Kwaito is South Africa’s answer to hip hop music, and is different for it incorporates a slowed down house beat with jazz, blues, R&B and reggae.

The title of a report on CNN.com, “Kwaito: South Africa’s hip-hop?”, calls a relationship between the two genres into question, and only likens them because both music styles have their own subcultures.

According to TIME, she was known both for her diva attitude and scandals involving sex and drugs, but also for lyrics that dealt with complex issues of African culture and life.

While a CNN article considered Boom Shaka and TKZee the most influential Kwaito groups in South African music.

Boom Shaka’s music is known to be not only popular in South Africa but all around Africa.

According to FHM magazine, Lebo Mathosa performed alongside superstar performers Will Smith and Missy Elliott and has also recorded a duet with R&B star Keith Sweat, this also helped in globalizing Kwaito.

Common analyses show that there are many who assert Kwaito’s apolitical character. It is very important to note that a refusal to deal with the contemporary realm of politics is an extremely political statement that denounces the political status quo.

In the words of Rastafari teacher Leachim Tufani Semaj, “Whether you deal with politics or not, politics will deal with you. The statement that one does not deal in politics is in effect a political statement.”

Gavin Steingo gave an example in his article “South African music after Apartheid: Kwaito, the ‘party politic,’ and the appropriation of gold as a sign of success” by saying that there was not a political view in the first song of Mandoza’s album because Godoba kept repeating “Cyborg/Move Your Skeleton” throughout the whole song.

On the other hand, according to Simone Swink’s article “Kwaito: much more than music”, it is impossible to talk about Kwaito music without referencing the political history of South Africa.

Steingo further states, “Most Kwaito is overtly political, even if it seems like it is not”.

Steingo adds that it was more of anti-political situation for the artist than apolitical because the youth of South Africa desire to disengage from the long years of oppression and political protest of the apartheid era. “Therefore, Kwaito music represents the refusal of politics.”

It has also been noted that there are some Kwaito songs that reflect an artist’s political view because there are some artists like Zola, that rhyme, chant, or sing about explicitly political and ideological issues. However, there are cases when people say Kwaito refers only to the apolitical variety.

According to Hlasane the late 90s and early 2000s saw a string of solo efforts from members of key kwaito groups such as Kabelo (of TKZee, who released Everybody Watching and Rebel Without Cause), Mandoza (of Chiskop, who started with the banger 9II5 Zola South and later the massive hit ‘Nkalakatha’), Mathosa (of Boom Shaka, whose work earned her KORA and SAMA awards), Ishmael (of Skeem and Prophets of da City), as well as all members of Trompies, Abashante, Bongo Maffin and Mafikizolo.

Kwaito artist OscarwaRona recalls, “We used to do tracks where we would ask why is the divorce rate so high? Why are little children being found in shebeens drinking?”. The aftermath of a system of racial subjugation that was in place for centuries is equally demanding of attention as the atrocities that occurred during apartheid.

Kwaito, as a weapon against the status quo, seeks to forge an identity for the youth and redirect the youth towards self-reliance and positive action.

With a well-coordinated strategic plan for Kwaito, the genre can become a game-changer in uplifting the youth of Mzansi, and potentially become a springboard for the next government and President of the country to come from the youth. 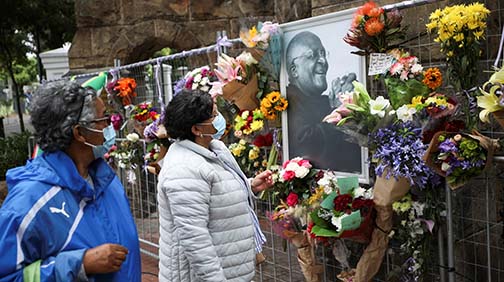 As Desmond Tutu Goes Home, The World Mourns An Iconoclast