Reasons Why You Should Fly Ethiopian Airlines At Least Once 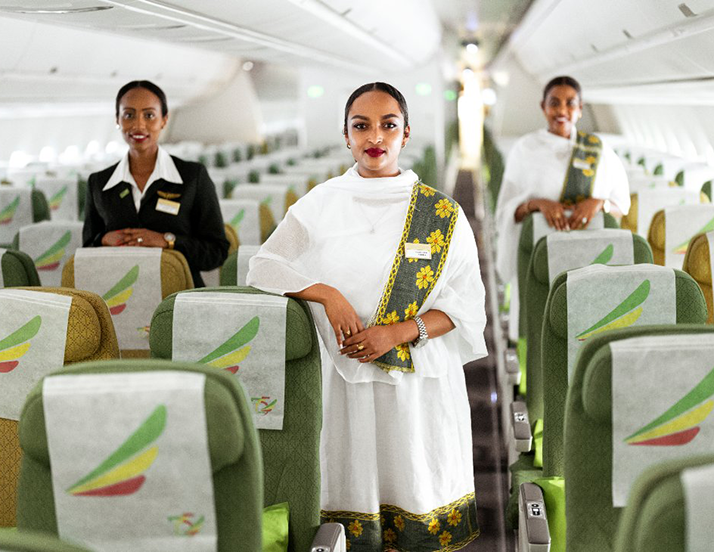 Steve Baloyi is a friend who lives Johannesburg, and was scheduled to attend a business summit in the United States. For some reason, he missed out on this all-important event because of the perennial flight delays that has dogged African aviation. As if the delay before the eventual departure was not enough, he complained of having had a flying experience in an airplane that moved “like a ship travelling by sea”. In his own words, he just couldn’t wait to deplane.

From the booking stage to the actual flight, he summed up his experience  in one short phrase: “100 Ways Not To Fly”. I have met hundreds of people who like Steve who had horrible experiences with one of the local airlines that serve the African air space. Traveling by air, like every other service, must be enjoyed.

In my over 30 years of traveling between Africa and]the US, I have experienced the good, the worst, the ugly. Conversely, I have flown on some good airlines. My friend, Steve did not deserve to miss an event that could have probably changed the face of his career.

As a matter of fact, every traveler would want to have a memorable experience when in the skies. This is why we recommend that you choose an airline wisely. In this piece, I shall share the advice I gave to Steve why Ethiopian Airlines (ET) is the best bet for quality air travel between Africa and the United States.

Firstly, Ethiopian Airlines is not just the continent’s leading carrier, over the years it has built an unrivaled reputation in Africa for efficiency and operational success.  An airline that has been around since 1945 and still topping the charts in 2022 speaks so much of decades of a culture of excellence. When most airlines in the continent are disappearing at an alarming rate from the aviation radar, ET has remained rock solid. This Africa airline continues to compete with the likes of such well-funded Middle Eastern competing carriers such as Qatar and Emirates and has still showed no signs of slowing down anytime soon. One of the strong case for ET is that the airlines boasts of the largest, newest and youngest fleet in the African continent that serves 127 international and 22 domestic destinations. With a range of passenger services covering long-range, medium-range, regional and domestic as well as cargo and non-scheduled services, Ethiopian airlines has grown into that airline brand where travelers are certain of all kinds of air travelling services. ET can be compared to a one-stop shop for everything aviation with its wide range of services.

To ensure that it is at par with the best of the world in the airline industry, ET has in its fleet, Africa’s first Airbus A350-900 – the most modern airplane in the world. Other equipments in its fleet include Boeing B787-8, Boeing B777-300ER, Boeing B767-300ER, Q400 Bombardier, Airbus A350-1000 and Boeing B737 MAX 8s amongst other. In total, it currently has 139 aircraft in its operating fleet and 39 aircraft in its total fleet on order. What this means is that, with Ethiopian Airlines, you will guaranteed of travelling in the most comfortable airplanes in the world. In addition to comfortability, there is availability. When comfort is always available, satisfaction is the result.

It was the Roman General, Octavius who in the middle of a battle declared to his army that “We expand or we die”. This philosophy has been adapted to the business world by Peter Drucker and rephrased to “Innovate or Die”. The major reason why most of the national carriers in African countries failed to survive the times is their inability to adapt to new trends and introduce innovations in their business service processes. Ethiopian Airlines understands the power of innovation and the importance of maintaining relevance through adaptation. This is why they have embraced and leveraged technology to foster a harmonious experience for their customers. With a continued focus on innovations, Ethiopian Airline is the most technologically advanced airline in Africa. With its mobile app and website, it has improved to deliver seamless services. You can reserve seats, track baggage location, search and make your bookings to over 110 destinations around the world, download your boarding pass, manage trips, select preferred seats and amend your travel documents with just a simple tap, and at your convenience. The world has become a busy place. Queuing to obtain a service is no longer fashionable. The aim of technology is to make life easier and this is what Ethiopian airlines seems to have in mind for customers with their mobile App and website. When Steve told me of the frustrations he faced trying to book a ticket to America in an unending queue attended to by rude attendants in the airline he boarded to America, he was so shocked and at the same time relieved when I showed him how easy it is to book a flight on Ethiopian Airlines from the comfort of his room. Ethiopian Airlines makes the whole process easy that is why it is the choice of those who value their time and convenience.

Thirdly, one of the ways to identify a good brand is that of attitude. A brand, especially an airline brand, is as good as the quality and attitude and demeanor of its staff. The hostesses in Ethiopian Airlines are some of the friendliest anywhere in the world. Every encounter with them begins and ends with a smile. Their commitment to ensuring the satisfaction of their passengers has definitely been an integral part of their success stories for over 70 years. The royal experience that the staff of Ethiopian airlines gives everyone makes you want to patronize them again and again. Talking about the quality of the staff at the Ethiopian Airlines is a corporate obedience to a popular African proverb that says “Never hide a good thing”.   In my conversations with some of the executives of the airline in addition to my personal research, I found out that the Ethiopian Airline is a part of the Star Alliance. The Star Alliance is a 26 Airline alliance of the best airlines in the world with a robust customer centric vision. Its commitment to a beautiful customer experience has seen it prioritize the policy of training and re-training of its staff.

Aside having a team on staff, since I knew about Ethiopian Airlines, they have always maintained a culture having the most capable hands as chief executive officers with a fine blend of executive managers and support staff.  Ethiopian Airlines has been at the top for over 70 years because it has always been in good hands.

Inevitably, ET’s pursuit of excellence has not gone unnoticed.  Its position as an industry leader has been confirmed by numerous recognitions and awards. To mention but a few, The Ethiopian Airline won the NEPAD Award in 2009. Before then in 2007, ET won the “Africa Best Business Award” in Beverly Hills, California hosted hosted by this media organization, The African Times/USA. It also received the AFRAA Award of Airline of the Year consecutively from 2009-2017. In 2011, it won the award of Africa’s most profitable airline. In the same year, it clinched the Bombardier’s Airline reliability performance award. As recognition for the customer experience service I highlighted earlier, the Ethiopian Airline won the Excellent Customer Service to African Diaspora in 2012. It won the African Airline of the Year in 2014, 2016, 2017, 2018 and 2020. In 2016, no other airline was awarded the best airline staff in Africa other than Ethiopian Airline – an award it has retained since then. For foodies like yours truly, Ethiopian Airlines has been winning the award for outstanding Food Service of any African airline since 2017. In addition, the airline has received the award for the best Cargo Airline in Africa numerous times.

From the foregoing, it is safe to say that Ethiopian airline is the most decorated airline in all of Africa. Who wouldn’t want to patronize an award winning brand?

To show how appreciative of their customers they are, the Ethiopian Airlines has one of the best customer loyalty reward program for an airline anywhere in the world. It implemented the industry-first credit card in a regional market that offers customers the opportunity to earn miles and points with spends. Ethiopian Airlines has been a member of the “Miles and More” program since 2007. This is a customer loyalty program where you can earn award and status miles on all regular flights operated by Ethiopian Airlines (ET). Spending miles is also simple and easy. You can very easily exchange the miles you have earned for attractive awards. The Ethiopian Airline also has a membership reward program for customers called ShebaMiles where one can become a member and earn miles on the things they do everyday – not just flying. Customers can now use their miles on a wide range of award including flights, upgrade and so much more.

Other services that passengers enjoy when traveling with Ethiopian Airlines include: In-flight entertainment, various special menus on request, In-flight magazine, Duty-free shopping, arrival service and National specialities on board.

All these put together form the basis for recommending Ethiopian Airlines to my friend, Steve. He has since attested and confirmed that Ethiopian Airlines is customer-centric, modern, innovative and service oriented – a brand that travelers can trust when flying from Africa to their America hub. This December, I looking forward to seeing my friend, Steve at the  upcoming US/Africa Summit to be hosted by US President Joe Biden in Washington DC.  He has confirmed to me that his flight is booked with Ethiopian Airlines and can’t wait for another amazing experience. For my recommendation, he promised me lunch. I am highly recommending this African airline carrier to our readers.  And I can assure that you will not be disappointed.  Like I did with my friend, I am open to more lunch invitations for introducing you to the Ethiopia magic.