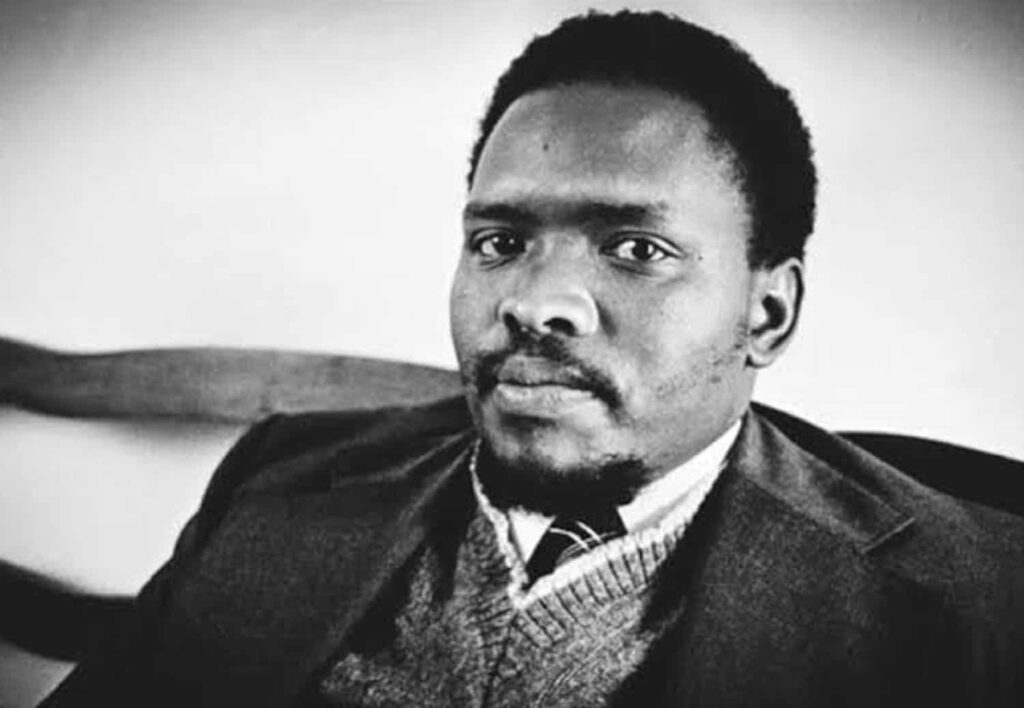 Steve Biko died at the hands of apartheid security agents at the age of 30 on 12 September 1977.

45 Years On, his Killers are not on the SA Police Service’s most wanted list.

After so long, I think President Cyril Ramaphosa must tell the nation if there will ever be any justice.

Biko was at the forefront of a grassroots anti-apartheid campaign known as the Black Consciousness Movement (BCM) during the late 1960s and 1970s.

His ideas were articulated in a series of articles published under the pseudonym, Frank Talk.

Stephen Bantu Biko was born on 18 December 1946, at his grandmother’s house in Tarkastad, Eastern Cape. The third child of Mzingaye Mathew Biko and Alice ‘Mamcete’ Biko, Steve had an older sister, Bukelwa, an older brother, Khaya, and a younger sister, Nobandile.

In 1977, Biko broke his banning order, which among other things restricted him from leaving King William’s Town.

Defiant, a physically fit and strong Biko travelled to Cape Town, hoping to meet Unity Movement leader Neville Alexander and deal with growing dissent in the Western Cape branch of the BCM, which was dominated by Marxists like Johnny Issel.

Biko drove to the city with his friend Peter Jones on 17 August 1977. However, Alexander refused to meet with Biko, fearing that he was being monitored by the apartheid police. While Biko and Jones were driving back to King William’s Town the next day (18 August 1977), they were stopped at a police roadblock near Grahamstown.

Biko was arrested, and beaten by the police. He was first taken to Port Elizabeth prison before he was transferred to Pretoria on 11 September 1977. Bruised and battered, Biko was put in the back of a police van and driven to Pretoria – some 12 hours away. He was held in chains at Pretoria Central Prison.

While in custody Biko was deprived of food. Within days Biko was dead.

Biko’s death was described by the family’s lawyer, Sir Sydney Kentridge, as “a miserable and lonely death on a mat on a stone floor in a prison cell”.

Biko was buried on 25 September 1977 in the Ginsberg Cemetery, outside King William’s Town.

And to this day, it is not known by the public how he died.

On the 45th Anniversary of Biko’s death on Monday (12 September 2022) several political leaders and activists remembered one of South Africa’s finest sons.

Anton Emmanuel @AntonEmmanuel2 tweeted: “45 years today since the murder of Steve Biko, architect of black consciousness and midwife of my activism.

Rooted in knowing one’s history, his legacy remains relevant – resistance and pride in the face of widespread oppression.”

During Biko’s commemoration on Sunday at the Steve Biko Centre in Ginsberg, Eastern Cape, Azapo president Nelvis Qekema said Biko would be appalled to see the state black people are in since democracy.

“If Steve Biko found us in this condition, he would cry,” Qekema said. He added that this means Biko’s death was in vain.

“After 28 years the wealth of this country is still controlled by 10% of white people. Biko would cry. If Steve came and saw that black schools are using pit latrines, pit toilets, Steve Biko would cry,” Qekema reiterated.

Zwelinzima Vavi, South African Federation of Trade Unions (SAFTU) general secretary, believes that slain anti-apartheid activist Biko would be disappointed in the state of South Africa at the moment.

Vavi stated that South Africans are losing confidence in parliamentarians solving the challenges the country faces. On Sunday Vavi was joined by various opposition parties who gathered at the Steve Biko Centre to remember the late struggle hero.

Vavi says the current crop of leaders is failing the principles that Biko upheld. “Almost two-thirds of our people are speaking through their feet, they no longer have an interest in that bourgeoisie arrangement that is taking place in parliament.

That’s why they are occupying the streets on their own, protesting daily fighting their own battles, says Vavi. PAC and AZAPO have committed to working together to fulfill the realisation of Biko’s ideas. PAC president, Mzwanele Nyhontso says this collaboration will benefit both parties.

Nyhontso commented: “This unity unites the social forces behind the leadership of the Africans and Black Consciousness organizations. Steve Biko and Sobukhwe are honorary leaders this is to ensure we create socialist Azania”.

South Africa President Cyril Ramaphosa commenting on Biko in his weekly newsletter said: “He never got to see in his lifetime what he called ‘the glittering prize’, the realisation of true humanity.

“Writing about this ideal, he famously said: ‘In time we shall be in a position to bestow upon South Africa the greatest gift possible – a more human face’.

“He was cut down in his prime by those who feared the power and resonance of his ideas of self-liberation and his efforts to infuse black men and women with pride and dignity.”

The police officers who had held Biko were questioned but none of them confirmed his cause of death. In 1997, five former officers confessed to killing Biko. They applied for amnesty from the Truth and Reconciliation Commission but the application was denied.

To this day, the matter remains unresolved. I have to ask, what about the killers of Biko, Mr. President? Where is the justice?

Thandisizwe Mgudlwa is an Award-winning journalist