A thorough-bred politician, Karen literally missed by whiskers the opportunity to become America’s second citizen last winter and consequently lost out the exalted position to another Black woman, Kamala Harris.

According to the March edition of the prestigious Los Angeles Magazine that featured Ms. Bass on its cover, she has “spent her life defying expectations”. A native Angeleno, Karen grew up in the Venice-Fairfax district in the city she now aspires to lead. Daughter of a US Post Office worker and a hair salon owner, she attended the California State University in the Dominguez Hills where she trained as a physician’s assistant and later worked health facilities across the city.

Her passion for defending the downtrodden and the voiceless forced her to join forces with other community organizers to address the devastation of illicit drug use in her neighborhood and the city at large which resulted in the founding of the Community Coalition For Substance Abuse Prevention and Treatment where she utilized her medical training to help affected Black and Brown people. That was to prove her trajectory into the political minefield, thereby earning the deserved attention of veterans such as the one-time doyen of Los Angeles Black politics, the late Mervyn Dymally and retired US Congresswoman Diane Watson who Karen was to replace in the lower chambers.

At 51, Karen ran for the California Assembly and won in 2004. From there, her profile grew exponentially and she rose subsequently to become the speaker of the Assembly prior to being the majority whip with focus on healthcare and family-related issues. She was to gain national attention in the Democratic National Convention (DNC) with her grassroots work in electing Barack Obama as President in 2012, and a pivotal role in Hillary Clinton’s run for same office in 2016. However, Karen’s defining moment in Washington came when she mounted a stout opposition to what she perceived as President Donald Trump’s “personality disorder” with the launching of a petition drive to have the President “psychologically evaluated”.

As part of her resume while in Congress, she has had under her belt the position of chair of the influential Congressional Black Caucus and the leadership of the House Sub-committee on Africa which brought Karen in closer proximity with the continent’s power structure, and to her roots as a person of African extraction. Up until now, she still enjoys wide-range of friendship and relationships across the various regions of Africa.

However, her toughest political assignment is likely to be leading the city government of one of America’s prime metros – the affluent City of Los Angeles – if she gets elected the first female mayor and the second Black mayor in the footsteps of the Tom Bradley who she campaigned for as a high school pupil in 1969.

At the moment, bookmakers and pundits have her leading her opponents primarily because of her record in building bridges among Los Angeles’ racially diverse demography. In her campaign narratives, her handlers have been touting Karen as a new bridge-builder in the city – soft-spoken but firm, articulate and strong on details, and as someone with an uncanny ability to rapidly mobilize the grassroots.

ll things being equal (which is usually a stretch in politics), Karen Bass’ accession to the pinnacle of Los Angeles’ politics will further cement her place in history as a leader in her own right, and a worthy role model for the Black girl child around the world.

And since all politics are local, Karen is contextually poised to make more history not only for the Black World but for womanhood in general, come November. 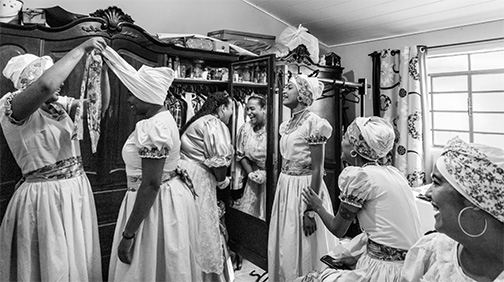 Inside the lives of Brazil’s quilombos: Forging An African Identity In Resistance

Afro-Brazilians find strength in the nearly 6,000 communities established by ancestors who escaped slavery.

Beginning as early as 1530 and continuing for the next 350-plus years, ships brought more enslaved Africans to Brazil—some 4.8 million—than to any other nation in the Americas.