“In my opinion, it’s time for Mason to relinquish its charter,” Comptroller Jason Mumpower wrote in a letter mailed to each one of Mason’s 1,337 property owners.

Mumpower urged local residents to “encourage your local officials to do what’s necessary to allow Mason to thrive. There is no time to waste.”

State comptrollers, responsible for financial oversight of local government, typically communicate directly with elected local leaders and not their constituents. “We have not issued a letter to citizens like this before,” Comptroller spokesman John Dunn said, noting it is “unprecedented for us to publicly call for a town charter to be relinquished.”

But the Comptroller’s unprecedented public callout comes at an unprecedented time not only for Mason, but for the state. Mason, located in the southeastern corner of Tipton County, now finds itself with some of the most coveted real estate in Tennessee.

It’s one of the nearest towns to the massive new site to be built for Blue Oval City, a key component in Ford Motor Co’s multibillion-dollar pivot to electric vehicle manufacturing.

Mumpower’s letter has infuriated Mason’s part-time elected officials, who insist they have no intention of ceding their town’s 153-year-old charter – which would subsume the largely African-American, majority Democratic community under the governance of Tipton County, which is predominantly white and Republican.

“This is our home. We were born and raised here. The majority of the town is homegrown people that live here,” Vice Mayor Virginia Rivers said. “He is trying to conquer and divide us. It’s akin to a hostile take-over and it’s not hard to figure out why here, why now.”

Town leaders are accusing Mumpower and other state officials of big-footing a long-ignored, largely Black community now that major investment is heading its way.

Mason is 60% Black and includes descendants of men, women and children enslaved in the area before Emancipation. For more than a century the town was led by White elected officials.

That changed in 2016, when fraud and mismanagement allegations led to the resignations of nearly all City Hall officials, all of whom were White. Mason’s current mayor, vice mayor and five of its six alderman are Black.

“It’s because of the Black people that are in office,” said Rivers, who first became Vice Mayor in 2021.

“And it’s because of all the places in the world, Blue Oval could have selected, they selected here. There’s no way Mason won’t prosper and grow. And now they want to take it away from us.”

This is our home. We were born and raised here. . . (Mumpower) is trying to conquer and divide us. It’s akin to a hostile takeover and it’s not hard to figure out why here, why now.

Highway 79, which links Blue Oval to Memphis, runs right past Mason’s small central district – its city hall, fire station, police station, an abandoned gas station, and the remnants of a grocery store that burned down three years ago after a semi-truck veered through it.

It also leads visitors to pitstops on off-the-beaten-path foodie maps of the South. It is home to Gus’ World Famous Fried Chicken, a small counterserving Black-owned restaurant that rose to fried chicken fame after Oprah Winfrey stopped by. Bozo’s Hot Pit Bar-B-Q, a half block away, is a destination for barbecue fans; the White-owned restaurant was featured in the Johnny Cash biopic “Walk the Line.”

Exit 39, the new I-40 off ramp slated to bring interstate traffic directly to Blue Oval City, lies four-and-one-half miles, door to door, from the town center. And CSX railroad runs directly through the town on a route that will take it straight to the Blue Oval campus.

Where to house an estimated 33,000 temporary workers needed to construct the site – and the 27,000 permanent workforce needed when the plant opens in 2025 – has been a central preoccupation for county and town mayors in Tipton, Haywood and Fayette counties, all within commuting distance of Blue Oval’s campus.

According to Mumpower, Mason’s leadership is ill-equipped to manage the challenges, and opportunities, ahead.

“Government isn’t working for the people who live in Mason now and people and companies are not going to invest in Mason,” Mumpower said.

“The opportunity for growth is at their doorstep and I don’t want the people of Mason to lose that opportunity,” he said. “They are about to be bypassed if their city leaders don’t make responsible decisions.”

Mumpower points to a 20-year history of fiscal mismanagement, including two major fraud investigations that resulted in criminal indictments. He also points to a history of financial accounting challenges that include town officials missing their annual audit deadlines each year since 2001.

The financial disclosures for the past two years are running late. Between 2004 and 2016, Mason’s financials were in such disarray they were “unauditable.”

Mason also has the highest property tax rate in Tipton County, funds used in large part to employ 26 people on the town’s payroll.

Mason operates its own water and gas utilities. City officials have been transferring utility payments into their general operating fund to cover expenses, contrary to Tennessee law. The state’s Water & Wastewater Financing Board is currently investigating. At the board’s last meeting, it threatened to subpoena city officials.

And the recent closure of the West Tennessee Detention Facility, one of the biggest tax payers in Mason, will only make the situation worse, according to the Comptroller. The facility, operated by CoreCivic, closed down under a Biden administration rule barring private operators from housing federal prisoners.

“I’m not sure there’s a full understanding of operating a town,” Mumpower said.

Mumpower has offered an ultimatum: either city officials decide to rescind its charter, bringing Mason under the authority of the Tipton County government – or the Comptroller’s office will take full financial control, overseeing the town’s budget with the authority to approve any expenditure of $100 or more.

Mumpower bristled at a suggestion by Vice-Mayor Virginia Rivers the state’s approach is motivated by race. “It’s offensive and difficult to respond to such a short-sighted comment as that,” he said.

Mumpower bristled at Rivers’ suggestion that race is playing a role in the state’s approach.

“It’s offensive and difficult to respond to such a short-sighted comment as that,” he said.

On Thursday, a standing-room-only crowd of Mason residents crammed into the pews and stood leaning against the walls of Cedar Grove Missionary Baptist Church at a meeting called by city officials to address Mumpower’s criticisms.

“Now it is the time for you to hear the rest of the story,” Rivers said.

Mason is in a “deep hole,” she said. But the roots of that hole trace back to fraud and mismanagement that occurred during previous administrations — and that the current administration has made progress in fixing.

A wall in Mason’s City Hall displays photos of past and present Mayors. (Photo: John Partipilo) In 2011, a former Mason town clerk pleaded guilty to embezzling $100,000 in taxpayer funds. In 2016, a former public works superintendent was indicted by a Tipton County Grand Jury after investigators discovered he had paid himself an extra $600,000 between 2007 and 2015. The town’s financial problems stretch back even further: a 2001 state examination of the town’s finances found numerous accounting errors in tax and court collections.

“This administration inherited half a million in debt,” Rivers said.

City officials acknowledge being in a “deep” financial hole, dating to a 2011 embezzlement by a former Mason town clerk and continuing through accounting errors in tax and court collections.

In 2015, after fraud allegations emerged, nearly the entire town government resigned, leaving a newly-elected junior alderman, Gwen Kilpatrick, to assume the office of mayor. Kilpatrick became the city’s first Black mayor. Since then the city’s leadership has remained largely African-American.

And since then, Rivers said, city officials have worked to pare the town’s debt that accrued during prior administrations while planning for a future with parks, paved streets, a new codes department, infrastructure improvements and beautification projects. In the past three years, city finance officials have completed five of its past-due financial audits. By the end of this year, they expect to be caught up.

Of the 26 people on the town’s payroll, six are part-time leadership employees including the mayor, vice mayor and aldermen, who collectively earn just $1,100 per month. The remainder of employees — police, fire, utility and public works — keep basic city infrastructure running.

“It’s kind of hard to go through this and not be recognized as a city that’s trying to progress,” Rivers said. “It seems like no matter what we do we’re knocked down. Why didn’t they hold the previous administrations responsible?”

Town officials won’t cede their charter, and they plan to fight any effort to take over the city financially, Rivers said.

And, she told residents, they are enlisting outside help.

Gloria Sweetlove, president of the Tennessee State Conference NAACP, said she showed up at the town meeting to offer support, and to marshall resources. 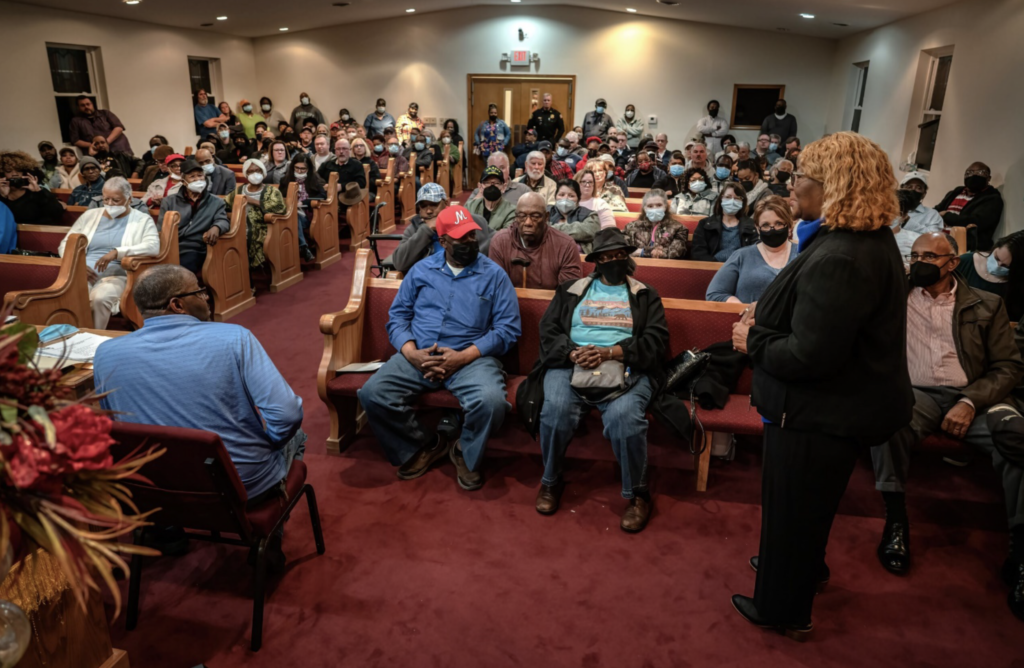 The Comptroller initiated a public airing of the dispute, releasing its letter to residents to reporters statewide — but county officials, with outside assistance, have begun their own counter-messaging.

“Will Black People’s Land be Stolen in Tennessee — Again?,” a headline in the Tennessee Tribune, a statewide Black paper read last week.

Mumpower is equally prepared to act. And, he said, citizens of Mason have nothing to worry about if they decide to rescind their charter.