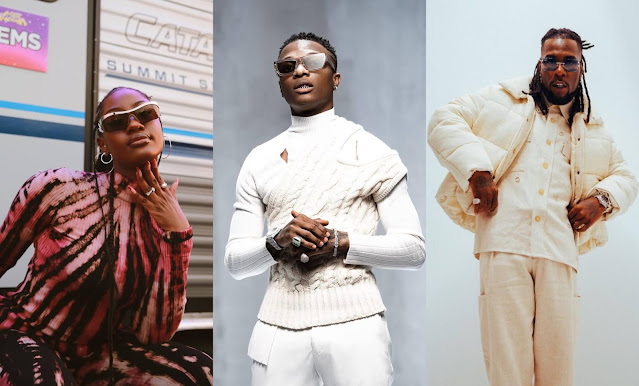 2022 was a landmark year for African artistes and Afrobeats genre on the world stage. From selling out International arenas to winning awards and overwhelming the internet, African musical artistes took the world by a storm this year. The African Times/USA  conducted a survey with 200,000 readers who voted for the top 10 African artistes of the year 2022.

The top 10 African Artistes of the year are:

The Grammy award winning african giant have kept the flag flying in 2022. He won the Best Africa Act’ at the 2022 MTV European Music Awards. Burna Boy’s “Last Last” with the latest feat, became the fastest Afrobeats song to be certified Gold in the USA, just 121 days after its release. The song also qualified for a Gold Certification from the Recording Industry Association of America (RIAA). The Grammy award-winning superstar previously sold out the iconic Madison Square Garden in New York in May 2022, and a few months later, he sold out the 21,000-capacity State Farm Arena with a breath-taking performance. He has been nominated yet again for the Grammy awards.

Kizz Daniel has brought so much joy this year with two major hit songs that have made millions of persons around the world go crazy especially with the associated dance challenge. His song “Buga” is perhaps the most danced song by a major African superstar this year. Both the high and the low, the rich and the poor, Presidents and president’s wife joined in the frenzy and rave of Buga. Shortly after Buga’s reign, the superstar released another hit single titled “Cough” and created a dance step that is yet again making millions around the world go crazy. He was invited to perform at the World Cup at Qatar.

Black Sheriff is the golden boy of Ghanaian music in 2022. His song “Kweku the Traveller” broke internet records, and became a fan’s favorite. He won the artist of the year 2022 at GMA UK awards. He sold out his London show this year and his debut album “The Villain I Never Was” has been a sensation too.

The star girl who rose to fame off the “Essence” track with Wizkid has continued to shine at the global stage. She won the Best international Act at the Bet Awards 2022. One major feat is her participation in the soundtrack of the Global movie sensation “Black Panther” where she wrote a song performed by Rihanna. Tems is one of Africa’s export on the international stage this year.

The Amapiano crooner has been flying the South African flag in 2022. He was crowned the king of south African music in 2022. His exploits were recognized when he was nominated in the category of Best African Act at the MTV awards in 2022.

The young Nigerian artist have risen to the top since his debut in 2019. His calm down song has been one of the most trending songs by an African Artist in 2022. The remix of the song where he featured American superstar Selena Gomez has further pushed him higher on the international stage where his song is appearing on US and UK charts. In 2022, he went on an international tour that attracted large following.

The Grammy award winner has continued to be a top artist from Africa since the last 10 years. As a demonstration that he is still at the top, he sold out the Madison square garden in 2022. He has earlier sold out the 17000 capacity Ziggo dome in Amsterdam. He became the first artist to win the favorite Afrobeats artist in 2022 at the US music awards.

Alongside Wizkid, Davido has been a leading African Artist at the global stage since the last decade. He sold out the O2 arena this year and got a lot of endorsement deals. He was chosen to feature in the official world cup theme song.

The fast rising African Artist was a major name in the year 2022. Among the music stars in Nigeria, 2022 could be described at Asake’s year as he topped charts for long. His dominance of charts in 2022 with popular songs like Organize has even got other Artists to admit that it is indeed Asake’s year.

As the richest musician in South Africa and second richest musician in Africa with an estimated net worth   of $60 million dollars. He has had collaborations with the biggest names in American music. In the 2022 Grammy awards, he won the award for the best dance/electronic album.