Who’s Behind The New Wave Of Coups In Africa?

The 82 coups Africa experienced between 1960 and 2000 were devastating for the continent— contributing to the instability, corruption, human rights abuses, impunity, and poverty that characterized many African countries during that era. Coups, moreover, are contagious. A successful coup significantly increases the probability of subsequent coups—in that country as well as its neighbors.

The recent spate of coups in Africa, therefore, is bad news. In the past two years there have been coups in Mali (twice), Chad, Guinea, Sudan, Tunisia, and, arguably, Algeria and Burundi—many of which were navigating democratic transitions. This variant of the coup bug can be traced back to the coups in Egypt and Zimbabwe a few years earlier. That means nearly 20 percent of African countries have succumbed to coups since 2013. The continent, thus, risks hurtling back to bad old days of military misgovernance—a period often remembered for its “lost decades.”

Coups are ultimately cold-eyed calculations of benefits vs. costs. The upsides are fabulous— power and unbridled access to state resources. The allure of a coup, consequently, will always exist. The potential downsides—failure or imprisonment—are likely viewed as manageable for unconstrained military actors under a civilian administration. Those who mount coups, in short, do so because they believe they can get away with it, with minimal costs.

Under the Organization of African Union’s policy of non-interference, coup plotters did not need to worry about external costs. The plethora of coups during this era demonstrates the open invitation to military takeovers created by this posture. The African Union’s shift to a policy of non-indifference at its creation in 2000 fundamentally altered this calculation, subjecting a junta to potential suspension, sanctions, and the threat of intervention. These costs were further amplified by penalties from Western democracies and international organizations.

“By treating coups as unfortunate but normal means of transferring power in Africa, international actors inadvertently provide coup leaders a helping hand across the finish line.”

The recent rise in coups in Africa (a pattern not observed in other regions) reflects a waning in regional and international actors’ willingness to enforce anti-coup norms in Africa. This is a result of a confluence of factors, including a regional democratic recession, an inclination by regional bodies to negotiate compromises with coup leaders, reticence to mount military interventions, and distractions of international actors with internal crises and the pandemic, among others.

This pattern underscores the critical role that regional and international actors play in mitigating coups. What is a coup, after all, but some military actors claiming that they are the sovereign representatives of that state? To be sustained, coups need to be recognized. If international actors refuse to do so, then the putschists are politically isolated—further compounded when they are denied access to a state’s sovereign financial accounts.

International actors, in short, have a critical role in validating coups. By treating coups as unfortunate but normal means of transferring power in Africa, international actors inadvertently provide coup leaders a helping hand across the finish line to consolidate their putsch.

The United Arab Emirates, Saudi Arabia, and Egypt have viewed African coups as a means of enhancing their regional ambitions. They have been actively sponsoring the Sudanese military’s bid to hold onto power. They have also been busy behind the scenes in emboldening and providing cover to Kais Saied’s auto-golpe in Tunisia. Preventing an Arab democracy from taking root also blunts any reformist momentum these Gulf states might face to open their own highly restrictive governance structures.

Russia has also been actively supporting coups in Africa. Often working through the Wagner mercenary group, Moscow has maintained a close relationship with the military throughout Sudan’s democratic transition and reportedly agitated for it to seize power. In exchange for its support, the Sudanese junta is likely to grant Russia naval port access to Port Sudan, giving Moscow a military foothold in the important Red Sea corridor. Wagner interests will also continue to operate in western Sudan in support of gold and other illicit trafficking through the Central African Republic.

In Mali, pro-Russian disinformation campaigns had disparaged the authority of democratically elected President Ibrahim Boubacar Keita in the year preceding the August 2020 coup. This messaging contributed to the opposition protests Keita that were used as a justification for the coup. Several members of the junta had previously studied in Russia.

To compensate for their lack of domestic legitimacy, coup makers crave international validation. This gives external authoritarian actors more leverage to compromise a state’s sovereignty. The coup in Mali, for example, has led the junta to consider inviting in Russian mercenaries, an action that would dramatically reshape Malian security and foreign policy. The effect of such a decision, taken by unelected military officers operating outside a constitutional framework and absent public accountability, would not be in the interests of Malian citizens, but it would enhance Russian leverage.

The most significant action the international democratic community can take to reverse the trend of coups in Africa is to incentivize democracy. African governments that commit to and uphold democratic practices should merit significantly greater diplomatic support, development and security assistance, and promotion of private investment. While Africa’s democratization wave of the 1990s and 2000s was led by domestic reformers, there were clear international incentives for adapting democratic norms. International democratic actors need to recommit themselves to these norms by building a more unified posture in sustaining opposition to coups.

“The most significant action the international democratic community can take to reverse the trend of coups in Africa is to incentivize democracy.”

This diplomatic effort needs to actively engage the African Union and Regional Economic Communities, each of which have their own democracy charters, to affirm these norms. Much of the public reaction and coordination of international responses to a coup occurs through these regional bodies. If African regional institutions are clear in condemning a coup, it is far easier for the international democratic community to rally behind that position.

International democratic actors may rationalize that, once a coup has occurred, the best that can be done is to maintain engagement in the hope of encouraging gradual reform over time. The problem with this approach is that leaders who have come to power by breaking the rules—be it through coups or by evading term limits—tend not to moderate but to act with escalating impunity.

The flip side of providing incentives for Africa’s democratizers is the need to consistently impose real costs on coup makers. Those who seize power extralegally should not be recognized. Financial assistance and debt relief should be suspended. Coup leaders should have their assets frozen and denied access to the international financial system. Coup-installed governments should be denied access to sovereign accounts. The posture should be to first walk back the coup, then negotiate, not vice-versa.

By ensuring there are stringent costs on coup leaders, international democratic actors can also help balance the scales domestically. Protests and widespread civil disobedience from citizens who reject the unconstitutional seizure of power can escalate pressure on coup leaders. International democratic actors, therefore, must be careful they do not inadvertently undercut this domestic resistance by recognizing a coup, effectively providing legitimacy where it is otherwise absent.

External powers that are financially or politically propping up coup leaders must also face costs. In addition to blocking the democratic aspirations of millions of Africans, these actors are effectively undermining a rules-based international system while reaping the benefits from it. These costs should be reputational and financial. Naming and shaming can deepen antipathy towards these external spoilers and limit their regional influence. This should be accompanied by curtailed security cooperation, constrained access to Western markets and financial networks, and sanctions under the European or Global Magnitsky Acts and Global Fragility Act. This is not just a moral stance but one that contributes to a more stable and prosperous Africa that can yield more reliable security and economic partners. Africa’s autocracies are responsible for over 75 percent of the continent’s conflicts, forced migration, and food crises. If the West wants to help stem the flow of these destabilizing forces, then it needs to be a steadfast champion of democracy in Africa.

There was a reason the international community broadly worked to eliminate coups in the post-Cold War period. The same rationale persists today. The question is whether international actors remember the script. 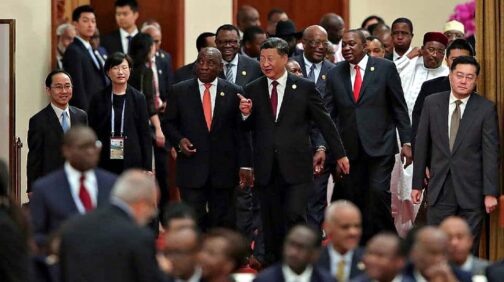 Geopolitical competition between the United States and China is taking central stage in global affairs. Growing tensions and rivalry between the two are worsening in South East Asia, the Indo-Pacific, the Gulf and Latin America. US President Biden has identified countering China as one of the main strategic priorities of his foreign policy. This rivalry is also playing out in Africa.