Why African And Black Refugees are Less Welcomed Than Others 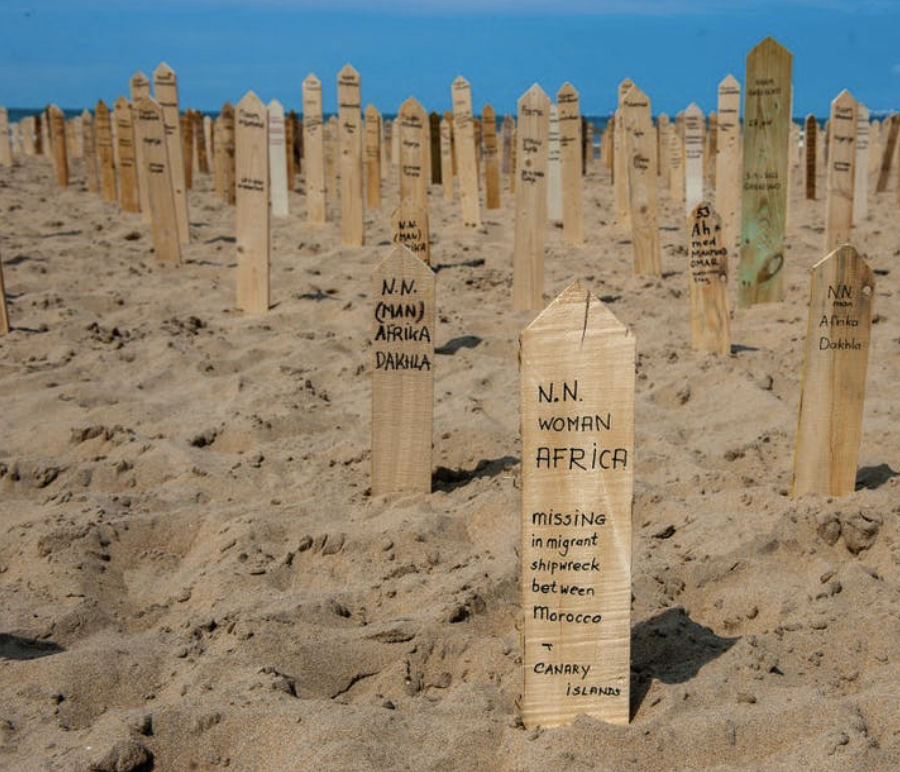 A pop-up memorial in The Hague for those lives lost crossing into Europe. Photo by Romy Arroyo Fernandez/NurPhoto via Getty Images

The world is accustomed to the stereotypical face of the refugee. The well-worn tropes of the Black or Brown face from post-genocide Rwanda, war-torn Somalia, or gang-ridden Honduras. According to the United Nations High Commissioner for Refugees (UNHCR), in the first half of 2021, there were more than 26.6 million refugees worldwide.

The humanitarian aid organization Save the Children reports that only about 1% of refugees receive the support they need to resettle in new countries. Most refugees end up languishing in a sort of limbo, not fully transitioning to a new life.

Refugee crises are far from novel, the world seems to shake its collective head, mutter sympathetic utterances, and invariably move on.

It has been personally stirring to witness the response to a relatively atypical refugee face. A fair skinned and straight-haired version of displacement.

In late February, millions of Ukrainians were forced to flee their homes as Russian military strikes commenced across Ukraine, most notably in the city of Kyiv. Vivid images of the heartbroken throngs who were suffering unspeakable losses captured the hearts of the watching world – as they should. Empathetic responses, including the tangible kind, were swift.

The US Senate has passed a US$40 billion bill to provide military and humanitarian aid to Ukraine. The European Union has also pledged close to 1 billion Euros to support Ukraine and countries who have accepted Ukrainian refugees.

While this is an unprecedented response from governments, there are also countless stories of individual and community level acts of support and outpourings of kindness. One viral photograph by photographer Francesco Malavolta showed a neat row of donated strollers at a Polish train station left as a thoughtful gesture for Ukrainian refugees with young children.

In the hours following the mass evacuations from Ukraine, however, a story of disparity emerged. African immigrants fleeing Ukraine reported being blocked by border guards at departure points. They were refused entry to surrounding nations who were accepting refugees. The vast majority of the 76,000 international students registered in Ukraine are Nigerian.

As President Biden announced his plan to accept 100,000 Ukrainian refugees to the US via temporary protective status, asylum seekers on endless wait lists looked on. Some cried foul. In ensuing weeks, the UK government was careful to note that Ukrainians would not fall under its newly minted plan to relocate, to Rwanda, asylum seekers arriving through irregular migration routes.

As a trained counseling psychologist – who focuses on mental health disparities, cross-cultural issues in mental health, and body image among African women – I have given much thought to how we may begin to understand these seemingly disparate responses to pain and suffering.

I believe there are harmful impacts if these obvious disparities are ignored. Most notably, the depictions of unfair responses are in full view of Black Africans (those directly affected and those not) who time and again see evidence that their value and humanity is worth less than other groups.

I contend that there are a few frameworks in our field to shape our thinking and nudge our attentions.

One possible explanation can be found in studies of intergroup empathy. There is some evidence that individuals experience a more visceral (emotional) response to the pain of another when the sufferer is perceived to be of the same in-group. The study argues, at a neural level, individuals feel the pain of others who they perceive to be like them. Important here is the human perception of who constitutes the in-group. What we can conclude is refugees from Ukraine evoke waves of empathy, the kind that galvanizes valuable support, because others perceive a shared humanity.

Another study found that White participants showed less physiological (bodily) arousal to the pain of Africans than to other Whites. In the same study, White individuals who had higher levels of implicit racial bias were more likely to have reduced reactions to the pain of Africans. What these findings suggest is that implicit racism plays a potent role in muting empathetic responses to racially marginalized groups.

There is wealth of research on the role of stereotypes underpinning racial prejudices. A recent study seems to suggest more of a bidirectional relationship. In other words, stereotypes breed prejudices, and prejudices breed stereotypes.

Nigerian author Chimamanda Ngozi Adichie argued in her now famous TEDTalk that stereotypes serve to diminish a sense of shared humanity across groups by providing us only single narratives of particular regions, nations or peoples. Adichie states the following in evaluating exchanges with her White college roommate who, she believed, held a single stereotypical story of Africa:

Being discriminating in which refugee groups are supported can have traumatic effects.

As an immigrant of Nigerian descent to the US, I am sitting with the hurt as I have watched the news lately. On the one hand, I appreciate the evidence of the goodness of humanity in the face of a senseless war. On the other hand, I am contending with the reality that faces like mine do not move the empathy needle for most of the world. What does it mean to witness your own dereliction ignored while others are aided?

Trauma researchers have stressed the importance of validation in the face of trauma and injustice. Because humans are social beings, healing invariably begins with another seeing our pain and responding to it in a way that communicates that we matter. That the world seems indifferent is a metaphorical stab to the collective hearts of Black Africans and it is not benign in its impact. It is its own trauma.

The refugees fleeing Ukraine are deserving of all the support and aid we can muster on their behalf. All refugees. One group coordinating evacuation and resettlement support is the Global Black Coalition, they support refugees of color from Ukraine or other displaced persons from marginalized groups.